A Soldier's Reunion by Cheryl Wyatt

After 10 years of separation, Mandy and Nolan are brought back together in a tragic situation. They both must kick in and do their job as they are called upon when the bridge over the Refuge River collapsed. Mandy is a doctor-in- training and driving across the bridge when the collapse happens she must help with the rescue efforts. Nolan is part of a pararescue jumping squad that is called to the scene. Childhood sweethearts parted ways to follow their desires, but were their desires what the Lord wanted? Mandy is afraid to allow Nolan back into her life for fear he will walk out as he did 10 years prior. Besides, growing up he hadn't shared her faith and her parents didn't approve of him. She has a dream to follow, allowing Nolan back in may hamper that dream. Would parting ways be worth the deep, dark void in her life again? Could they fall in love again? Could their love survive a 2nd time around? or would careers cause them to part again? I have so enjoyed Cheryl's Wings of Refuge series. I know you will fall in love with each character as they fall in love.

Posted by apple blossom at 12:23 AM No comments:

What's a run-down, ragged mom to do? your spirit yearns to soar, but your feet-and faith-are stuck in the diaper-by-diaper mud of everyday responsibilities. How can you de-much when you're chronically exhausted? Humorist Debora Coty has the answer in her April release, MOM NEEDS CHOCOLATE.

In mom-to-mom, smile-provoking style, Coty paints her offbeat picture of reality with a tangy twist while offering outrageous coping tips, off-the-wall insights, sisterly hugs, and warm encouragement. With witty frankness and wild abandon, she tackles the extremes of marriage, horror of embarrassing children, defeat (and re-defeat) of depression, aging grossfully (er, gracefully), and a veritable grocery-list of other mud-between-your-toes issues.
Debora Coty's latest, Mom NEEDS Chocolate, just released from Regal Books and is endorsed by legendary funny ladies Martha Bolton and Patsy Clairmont.
"Fatigued? Frenzied? Fragile? Sidle up to Debora's chocolate-covered chapters on life, love and looney liaisons and laught your way back into a place of peace" ~Patsy Claimont, Women of Faith speaker, author of Catching Fireflies

"Motherhood has it rewards, and Debora Coty is one of them" ~Martha Bolton, renowned humorist and author of more than 50 books


"Her humor and down-to-earth observations make the book not only a great read but also a practical encouragement for woment everywhere." ~Holly Wagner, GodChicks and WarriorChicks 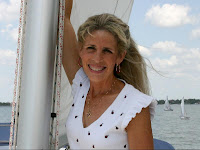 
You can learn more about Debora (and her other books) at www.deboracoty.com. 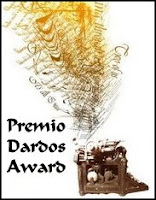 4 the LOVE of BOOKS recently received an award called the Premio Dardos Award. This honor was bestowed upon me by author Linda @ Katie & Kimble Blog a previous recipient of the award.

Premio Dardos means ‘prize darts’ in both Italian and Spanish and it is given for recognition of cultural, ethical, literary, and personal values transmitted in the form of creative and original writing. The rules are:

1) Accept the award by posting it on your blog along with the name of the person who has granted the award and a link to her/his blog.

2) Pass the award to another 15 blogs that are worthy of this acknowledgment, remembering to contact each of them to let them know they have been selected for this award.

And now, I pass this honor along to:

Labels: award, In the know, misc., this n that

The Case of the missing sock by Renee Hand

Oh, what a fun book this was. If your child loves solving puzzles then this is the book for him/her. Renee will take them on an adventure that they won't soon forget. Solving cryptograms is the name of the game. The Crypto-Caper even allow their readers to figure out six different cryptograms to help them solve the mystery along the way. What is a cryptogram? I'm glad you asked. It is a message written in code or cipher. Which is how the Crypto-Capers got their name.

Who are the Crypto-Capers?
Max, 14 year old, who loves out-witting the best maze makers.
Mia, 12 year old, a genius at solving puzzles, her specialty is cryptograms.
Granny, in her 60's, is a bit eccentric and as a unique was of doing things, but is terrific at solving problems.
Morris, 14 year old, a geek and the computer genius of the group.

The case is finding out who stole an green sock, this isn't just any old green sock. It is an antique sock belonging to Elvis Presley's grandmother. Also a pair of Prada sunglasses were stolen.

Have fun decoding the cryptograms as the story unfolds. Help the Crypto-Capers solve the mystery. The CC love adventure and solving a crime is their pasttime.

The Shepherd's Fall by Wanda Dyson 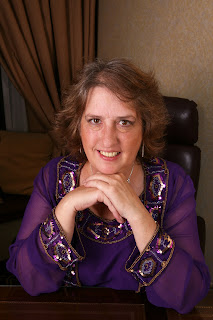 Wanda Dyson lives with her severely autistic teenager on a busy farm with horses, chickens, dogs, cats, rabbits, and the occasional fox, deer, groundhog, and snake. She could seriously live without the snakes, but that's life in the country.

After writing three critically acclaimed suspense novels, she was asked to write the true story of Tina Zahn (Why I Jumped), which was featured on Oprah. Readers characterize her books as "riviting" and "Packed with twists and turns."

Wanda has finished the second in this series called Shepherd's Run,that will come out in 2010. And she's hard at work on the third and final installment of the Prodigal Recovery Series - Marti's story -- tentatively called Shepherd's Quest. 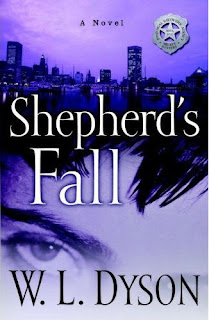 Bounty hunter Nick Shepherd is fearless when it comes to chasing down criminals. It's his difficult ex-wife, rebellious teenage daughter, and dysfunctional siblings that keep him awake at night. In charge of the family business, the Prodigal Recovery Agency, he thinks of himself as a shepherd of sorts. When his "flock" is out of his control, Nick's well-ordered universe falls into chaos.

Prodigal Recovery's search for Zeena, a prostitute on the run, leads to a faulty arrest, complicating Nick's business. He is thrown together with Zeena's twin, the beautiful Annie, and the two find themselves on a desperate search. The stakes significantly increase when Nick's daughter is kidnapped. Now, to save someone he loves, Nick must risk everything.but will it be enough

If you would like to read a Prologue excerpt from Shepherd's Fall, go HERE

The Firstborn by Conlan Brown

This week, the
Christian Fiction Blog Alliance
is introducing
The Firstborn
Realms (May 5, 2009)
by
Conlan Brown 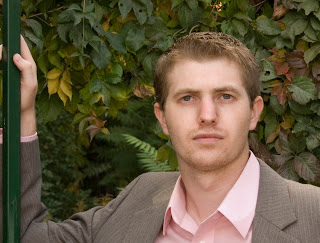 Born in 1984, Conlan Brown was functionally illiterate until the fifth grade, when he learned how to read and write, as well as a love of story, from his grandmother. Conlan went on to start college at the age of sixteen, and now holds a Master's degree in Communication, which taught him the academic principles needed to write Firstborn.

Conlan lives on Colorado's Front Range where he is working on his next book. He enjoys video editing, film scores, and developing high octane, thought provoking fiction that turns pages and excites the senses. 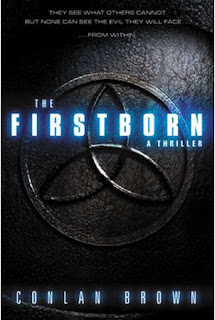 Hannah's head hung, long brown hair in her eyes. Her face felt pasty with cold and fatigue and pain. Arms behind her back, she sat in a chair, wrists and ankles tied to the wooden frame, chair legs bolted to the floor. A cold car. A gun. Horror. Pain. Grief. Screaming. A windshield blistering with holes. Darkness.

It all came over her like a flood. A pouring out of pictures in her mind. But then there was one more thing. Not an image, but a feeling--that half a continent away someone else had felt it all happening too.

The Firstborn, those gifted with Foresight, Hindsight, and Insight at the time of Christ's death are divided between themselves. And when an Islamic holy man is murdered outside of his mosque it becomes apparent that one of the Firstborn was to blame. Now, with the threat of a terrorist attack on an unspeakable target the Firstborn are spiraling out of control. Leaders are dying, members are being kidnapped, and unity is being forced. Three heroes, differently gifted and divided must work together to thwart those who would go too far.

Their breakneck race against time plunges them into a world of danger and through a gauntlet across the United States. From the Riverwalk of San Antonio, where Devin Bathurst, John Temple, and Hannah Rice must protect one another from assassination, to the gritty streets of Washington DC, a paramilitary compound in Pennsylvania, and ultimately back to our nation's capital, the Firstborn must unite to prevent an impending atrocity from becoming reality.

If you would like to read the first chapter excerpt of The Firstborn, go HERE