Two Are Better by Tim and Debbie Bishop 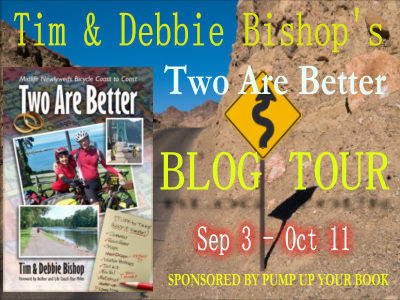 From an engagement to a cross-country trip in just ten weeks? And with no experience in bicycle touring—or marriage? While Tim left behind a 26-year corporate career and familiar surroundings, Debbie was about to enter a “classroom” she hadn’t seen in her 24 years of teaching.  Was it a grand getaway or a big mistake?

Over The Top (pgs. 90-91)Just 15 minutes into the day, we arrived at Rogers Pass and the Continental Divide.  When I saw the sign, I was shocked.  You’re kidding! I thought.  Where are the Rockies? We had seen so few snow-covered mountains.  Climbing through the Rockies had been much easier than expected and, other than Lolo Pass, did not seem like climbing at all.  Rogers Pass only stands 5,600 feet above sea level.

Unbeknownst to us, we had been ascending and fast approaching the beginning of the downhill ride east.  Another friendly tailwind had shrouded the climb.  But we weren’t about to get cocky.  After all, there were 3,000 miles to go.

Arriving at this landmark would not have surprised most bicycle tourists, but it did surprise us.  We had done so little pre-trip planning and were so busy with other aspects of the trip that we hadn’t reviewed the map in detail, except when making immediate decisions about when and where to turn.  But sure enough, there it was on the map: the Continental Divide!

The phantom climb up Rogers Pass seemed insignificant, but the descent was a treat.  The eastern side of the pass was steeper with some switchbacks.  My fearless wife, who sees no use for brakes when descending, flew around the curves and down the mountain.  After all, why use brakes and spoil the fun after you worked so hard to get up the hill?  Wasn’t this the reward? Of course, she does have a good point! 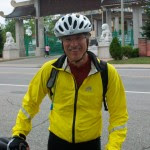 Originally from Maine, Tim Bishop has over thirty years of experience in business, first as a CPA, then for many years in various roles in the corporate world. In addition to consulting for small businesses, Tim serves as a Hope Coach for TheHopeLine, a nonprofit organization that seeks to reach, rescue, and restore hurting teens and young adults. 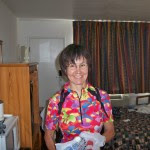 Debbie Bishop
Debbie Bishop has taught for over twenty-five years, for the past ten years as a literacy specialist in Framingham, Massachusetts. She has a passion for reading and seeing that young people do it well. She also has high interest in recovery issues and encouraging others with her own triumphs over struggles earlier in her life. Debbie also serves as a Hope Coach for TheHopeLine.

Visit the authors online at www.openroadpress.com.

Thanks for hosting the Bishops today. I'm in the middle of reading their book. It's fascinating. It's mostly told from Tim's POV, but there are tidbits from Debbie in between. I hope your readers get a chance to check it out.