Lady in the Mist by Laurie Alice Eakes

A Whole Town’s Secrets Held by One Woman…
Could anyone get beyond the secrets of her past?

In the little town of Seabourne, Virginia where Tabitha Eckles lives, another standoff is brewing. It is 1809 and relations between America and England rest on the edge of a knife, when Tabitha crosses paths on the beach one morning with a man named Dominick Cherrett. He seems to have his own secrets to keep, including why he, a British aristocrat, is on American soil working as an indentured servant.

One chance meeting leads these two secret keepers through a twisted path of kidnappings, death threats, and public disgrace. Can Tabitha trust Dominick? What might he be hiding? And can either of them find true love in a world that seems set against them?


My thoughts:
Oh, my what a page turner.  This is my first book of Laurie Eakes to pick up and it kept me wanting to turn the next page to see what was going to happen.  You name it, it is in there.  Everyone with their own little agenda and hidden secret trying to figure out what the other one is up too, even politics are alluded too.  There are characters from bondsmen to midwives, Englishmen and the list goes on.  Deceit, trust and forgiveness are part of the scheme, but comes with a cost. 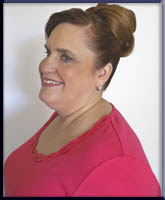 Laurie Alice Eakes began to be fascinated by the role of midwives in history during graduate school and she knew that someday she wanted to write novels with midwife heroines. Ten years later, after several published novels and a National Readers Choice Award for Best Regency, the midwives idea returned, and Lady in the Mist was born. Laurie Alice has a master degree in creative writing and writes full time from her home in Texas, where she lives with her husband and sundry dogs and cats.

You may find out more about Laurie on her web site here.
Learn more about this book here.

“Available February 2011 at your favorite bookseller from Revell, a division of Baker Publishing Group.”
A copy of this book was provided for this review by