Casey and Kyle: So Much For Being On Our Best Behavior!!! by Will Robertson 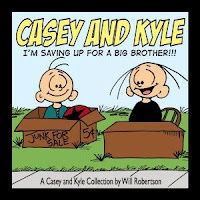 Casey and Kyle is a strip about the fun and chaos of kids. It’s about the things you remember about your own childhood and (for anyone with kids) the way your own kids really are.  It goes deeper than your average kid strip and builds on the dynamic that exists between an older and younger sibling: The way the oldest always gets to be the hero; the younger the bad guy. It features a cacophony of neighborhood kids, each one making his own indelible stamp on the other characters.

Casey and Kyle appears online and in print where it is enjoyed by nearly 200,000 readers each month. Each book includes nearly 300 cartoons.

They say that laughter is good for the soul.  So I guess we can say that this book is good for the soul,  well that may be stretching it a wee-bit.  Casey and Kyle comic book by Will Robertson will definitely bring some laughter to you though.   Casey always trying to raise money by selling his younger brother, Kyle, (what older brother doesn't go through that stage) and other means.  Casey hates lima beans which his mother seems to always serve him.  His antics will leave ya with a smile on your face that's for sure.  Good clean humor is always a plus and Casey and Kyle comics are just that.  Who says we have to be an old stick-in-the-mud all the time. There will be many chuckles as you read I'm saving for a big brother.  Now, I'm hooked and I'll have to see if I can find any more Casey and Kyle comic books. 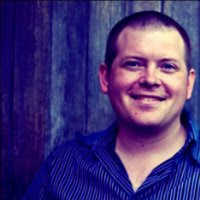 WILL ROBERTSON enjoys playing music and working on his serve in Tennis. His favorite beverage is an Iced Tea with no lemon. He loves Tacos and Panini Sandwiches and is fond of road trips. He is an avid mini golfer and an aggressive bumper car driver. He lives with his wife and two children in Oregon’s Willamette Valley. His house is yellow.

He started drawing comics on a road trip when he was twelve. Fueled by Bloom County, Garfield, Calvin and Hobbes and Peanuts, he began creating characters that would carry his own comic strip all the way through college. Along the way, his work was feature in The Statesman Journal (Salem, OR) and The News Register (McMinnville, OR) as well as being published nationally in a compilation of the best 100 Editorial cartoons by students across the US.

In late 2007, Will began to draw a series of cartoons based on his two boys. Those early drawings became the strip Casey and Kyle, which debuted online at comicsherpa.com (a new comic showcase developed by Universal Press Syndicate and gocomics.com) on February 6, 2008.

A year after its debut, Will published his first book of Casey and Kyle comics and began to shop his work to print as a self-syndicated feature. His work now appears in several publications, where it is read by nearly 200,000 readers.

When he is not drawing cartoons, he spends his days working with other self-published authors to bring their work to print, he illustrates books, hugs his wife and takes his kids to the park.
You can visit him online at www.caseyandkylecomics.com.