Kathi Macias has done it again.  She has created a story that keeps you wanting to turn the page to see what will happen next.  Her third book in the Extreme Devotion Series, Red Ink is just that a page turner.  It takes extreme devotion to stand in the time of persecution.  It takes extreme devotion to be lead of the Holy Spirit to pray for someone that has been laid on your heart that you've never met and don't know the circumstances.  Learn how Yang Zhen-Li suffers great persecution standing for her faith in Kathi's book Red Ink. Read Red Ink and find out how Yang Zhen-Li endures the unimaginable for her faith.  Though this is the third book in the series they are stand alone books.  May be read in any order.  I high recommend this book plus the other two:  No Greater Love and More than Conquerors, for that matter any of Kathi's book that I've read have been excellent.

Yang Zhen-Li defies not only her Communist parents but the government as well when she marries a poor Christian peasant and converts to his faith. When she begins to distribute Christian materials, particularly to children, she is arrested and sentenced to tenRed Ink cover years of hard labor. Will her husband and son wait for her and support her throughout their long separation? Will she even survive to return to them once again? Or will the evil guard Tai Tong, who has taken a personal dislike to Zhen-Li, convince her to deny her faith? Two elderly saints halfway around the world are determined to pray her through, though they’ve never met her and don’t even know her name. God’s faithfulness in the midst of unimaginable trials will bring about an ending that could never be anticipated—but will never be forgotten.

Yang Zhen-Li was nearing thirty but at times felt twice that old. Her back was becoming permanently bent forward from the heavy pails she carried daily, one attached on each end of the thick bamboo rod that stretched across her shoulders, mirroring the heaviness of her heart. There had been a time when she’d been acclaimed as a beauty, but she could scarcely remember why…or imagine that it would matter.

She tried to fight the encroaching darkness, tried to hold fast to what she knew was true, but the constant lies and propaganda were taking a greater toll even than the physical labor and abuse or the burning, gnawing hunger. If her situation didn’t change soon, she knew she would never live long enough to see her husband or son again. And with nearly eight years of her ten-year sentence left to serve, the possibilities of her emerging from prison alive grew dimmer by the day.

For to me, to live is Christ, and to die is gain. She forced herself to focus on one of the many scripture verses she’d had opportunity to memorize between the time she accepted Zhu Yesu as her Savior and her arrest by members of the Public Security Bureau (PSB) on charges of teaching religion to children, including giving them papers containing religious writings. Even before her arrest, her parents had written to her—warned her, begged her, threatened her—and finally had her kidnapped in an attempt to convince her to go along with the government rules, especially the one limiting each family to one child. After all, she already had a healthy son. Why would she want another baby when they could scarcely afford to feed the first one? But though her abductors had forcibly aborted her second child, they had not succeeded in convincing Yang Zhen-Li to abandon the faith she had adopted before marrying her Christian husband. If anything, the ordeal had only strengthened her resolve to take a stand for the meaning of her name—Zhen-Li, “Truth,”—and spurred her to begin actively sharing the Good News of Yesu every chance she got. As a trained teacher, that quite naturally included talking with children about the gospel, a practice expressly forbidden by the government.

And now she was paying the price. Separated from her family and sentenced to ten years of hard labor and “re-education,” Zhen-Li struggled to survive against pain, exhaustion, and bitter loneliness. Worst of all were the times she felt God had abandoned her. It wasn’t enough to know in her mind that He promised never to leave or forsake her. She needed a visible reminder—soon—if she was to continue to remain faithful behind these prison walls.


Read an Author Interview and enter for a giveaway copy of this book at Author Trish Perry's site here.
(Note: this is not my giveaway so please follow the link to enter ~ Thanks) 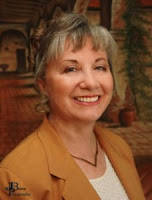 Kathi Macias is a blogtalkradio host and an award-winning author of more than 30 books, including her popular Extreme Devotion series from New Hope Publishers and Valeria’s Cross from Abingdon Press. A wife, mother, grandmother, and great grandmother, Kathi lives in Southern California with her husband, Al, where the two of them spend their spare time riding Al’s Harley—hence, Kathi’s “road name” of Easy Writer! Her latest release is Red Ink, the third book in her popular Extreme Devotion series.

You can find out more about Kathi and her writing/speaking at www.kathimacias.com or her blog at http://kathieasywritermacias.blogspot.com.

Thanks you for the moving review of Kathi's latest book. I'm glad you enjoyed it. All of her stuff is great, so at this point it is getting hard to pick favorites.

Wishing you and your readers a blessed Christmas.

Thank you so much for the great review of Red Ink. This story, though fiction, is loosely based on the life of my own personal heroine, Li Ying, who is currently serving a ten-year prison sentence in China for printing and distributing Christian literature. Please join me in praying for her, will you? Blessings to you all!