Sky Girl and the Superheroic Adventures by Joe Sergi 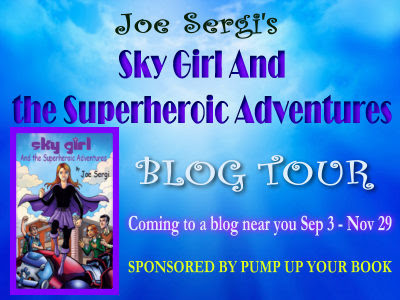 An Interview with Sky Girl (and Jason)
By Joe Sergi, author of Sky Girl and the Superheroic Adventures

Hi, my name is Joe Sergi and I have with me the costumed superheroine named Sky Girl.

JOE: Why did you do that?

SKY GIRL: Do what?

JOE: Touch you your ear and lower your voice. Iis Jason there?

JOE: It's okay, DeDe, I know all about you guys. He should join us.

SKY GIRL: Okay, I believe you.

SKY GIRL: But he isn't allowed to embarrass me.

(At which point, Jason Shewstal joined the interview.)

JOE: So Sky Girl, you have some pretty amazing powers.

SKY GIRL: I guess. I can fly, which is a like a combination of dancing and swimming. I have Sky Vision, which lets me see things in different colors--like red for hot, blue for cold. It also lets me know when people are lying.

JOE: That's how you knew I was telling the truth about Jason.

SKY GIRL: What did I miss? Oh yeah, I'm really strong and can't be hurt. I can also choreograph a show stopping dance routine.

SKY GIRL: Shhhh. I also just learned this net thing, but I'm not very good at it yet. I'm too emotional or something.

SKY GIRL: He promised he won't talk.  But, I knew that he would.

JOE: Wow!  That was quite a look you gave him.

SKY GIRL: It's okay.  We've known each other forever.  We've been neighbors our whole life.  Most people are confused by our relationship since I'm athletic and outgoing and Jason is . . . well, I mean, look at his shirt.  It says "I'm bananas for Commander Chimp," for gosh sake.  Jason is kind of a comic dork.

SKY GIRL: And, that’s why you’re not allowed to talk. (Giggles). To get back to the question, I basically have all the same powers as SkyBoy. So, I guess there may be more I don’t know about.

JOE:  Ah yes, thank you.  What can you tell me about SkyBoy?

DEDE: I'm not really sure I know how to answer that. Uhm, there are SkyBoy books and movies.  In fact, I use the theme song from the first movie in one of my dance numbers.  I'm sure Jason can explain . . .

JASON: Donald Davis, an obvious pseudonym, created SkyBoy. Let me see, SkyBoy debuted in November of 2001 in issue 56 of Powerful Tales. In that story, strange aliens gave a teenage boy special abilities far beyond normal mortals and charged him with the protection of mankind.  One month later, SkyBoy had his own book. After a while, Donald Davis mysteriously disappeared and others took over. Rumor has it that they are still working off a bunch of his original scripts, which he delivered before he vanished. SkyBoy currently stars in five monthly books, not including being a member of several super teams. SkyBoy is considered the hero of the new age. His unwavering morals and incredible powers helped to make SkyBoy a success. The character is currently appearing on TV, in movies, newspapers, video games, and comics. He also has an established rogue's gallery that includes, among others, Professor Z and Evil Brain, who are both in this book, an evil clone named Yksyob, Gremlin, Donna Dominion, Shadow and Commander Chimp.  SkyBoy and his catchphrase of "Good Golly" has become an American institution. His molecule symbol is one of the most recognizable in the world.

SKY GIRL: "Good golly?" Seriously, who talks like that?  And why would aliens give away the power when they could use it themselves? And why pick a teenager? It's just silly.  See, like a said, Jason’s a "dork."

JOE:  So, what are SkyBoy's powers? Are they different?

JASON: There seems no limit to his powers. Like DeDe . . .uh Sky Girl, he can fly, he has SkyVision and SkyHearing and is really strong and nigh invulnerable. He can also turn invisible. He can make psychic nets. Some speculate that SkyBoy has some sort of latent telepathic power because of his ability to . . .

JASON:  Pretty much, SkyBoy could do anything the writers wanted. He even gave a SkyMassage once to relax Princess Dominion and make her forget that they were married.

SKY GIRL: A sky massage?  Gee, that's not too sexist.

JOE: Some people have complained that Sky Girl is just a Supergirl clone? What do you have to say about that?

JASON: I think those people do not know DeDe or Sky Girl. Sure both heroines wear capes, tights and a skirt.  But, that is where the similarities end.  Supergirl is pretty much a girl Superman. They have basically the same origin and motivation and never doubt or question what is right.  It is probably why she has had so many series over the years and her characterization has been so inconsistent. People do not really know how to write her.  Sky Girl's motivation is very different than SkyBoy, and she certainly does things her own way and has her own distinct personality.

JASON: You do not agree?

SKY GIRL:  Actually, I don't understand anything either of you just said.

JOE: Sorry, Sky Girl. I'm a geek, too. I just have one more question about your villains.

JASON:  Well, Sky Boy had his own rogues gallery called the Retallion Battalion, which Sky Girl apparently has inherited.  These are some pretty tough characters and Sky Girl has already faced off against nearly a dozen of them  . . . .

SKY GIRL: Uhm, sorry to interrupt, Jason.  But, I think I lost my contact and we need to go.

JASON: Let me get your purple backpack.

JOE: I understand completely.  Thank you for your time. Good luck with that contact lens.

Being a teenage girl is hard enough, but for DeDe Christopher, it is proving impossible.
In addition to cliques, books, and boys, she has to worry about capes, apes, and aliens. Last year, DeDe discovered that she possessed fantastic abilities that were strangely similar to those of a comic book character named SkyBoy.
With the help of her best friend Jason, a self-professed comic geek, DeDe accepted her legacy and became Sky Girl. Now, DeDe must learn what it means to be a heroine as Sky Girl faces the all too real enemies and allies of SkyBoy, including the clever Quizmaster, the beautiful Penny Pound, the enigmatic Jersey Devil, and the magical MissTick.
DeDe must also face personal challenges as she discovers the secrets of her late father and his connection to Skyboy--secrets that will affect Sky Girl’s destiny.

Joe Sergi lives outside of Washington, DC with his wife and daughter. Joe is an attorney and a Haller Award winning author who has written articles, novels, short stories, and comic books in the horror, scifi, and young adult genres. Joe is the creator of the Sky Girl series of novels and the editor of Great Zombies in History. His first novel, Sky Girl and the Superheroic Legacy was selected Best of 2010 by the New PODler Review. Joe is a life-long comic fan who regularly writes on the history of comics and censorship for the Comic Book Legal Defense Fund. A complete list of Joe’s titles is available at www.JoeSergi.net. When not writing, Joe works as a Senior Litigation Counsel in an unnamed US government agency and is a member of the adjunct faculty at George Mason University School of Law.

Thanks for hosting Joe today. Hope your readers get a chance to check out his book.