The Amazing Adventure of Paddy Platypus by Tom de Paolo 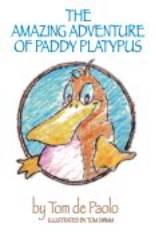 This is the cutest story about a platypus that has amazing speed. Sir Hugh, a self-appointed important man of Tasmania, talks Paddy into representing their nation in Los Angeles in a championship swimming competition. Paddy doesn't like all the lime-light of winning that is shown to him. He just wants to go back home and be with his family and live life in the slow lane.

This book would be good for reinforcing that home is really where the heart is while introducing young readers to a new animal, platypus. The platypus, with its unique characteristics, is an unusual and unfamiliar animal to most children. Even the country of Tasmania would be a good geographic study for kids. It too isn't a common country that most kids are aware of. children.

For more information about this book visit here.

Tom de Paolo, a native of Hollywood, California, graduated from the University of Southern California where he studied film. Upon graduation he enlisted in the U.S. Air Force and was able to contribute his talents to a movie crew documenting World War II. Now retired from the television industry and from being a marketing consultant for Disneyland, he resides in Laguna Beach where he writes and enjoys golf. De Paolo has also published four cookbooks and a fitness book for senior citizens.

A copy of this book was provided by the author and Bostick Communications for the purpose of this review.