Robin Parrish had two great ambitions in his life: to have a family, and to be a published novelist. In March of 2005, he proposed to his future wife the same week he signed his first book contract.

More than ten years he spent writing for various websites, including About.com, CMCentral.com, and Infuze Magazine, which is a unique intersection between art and faith which he also conceived of and created.

One of his more "high concept" ideas for Infuze was to return to his love for storytelling and create a serialized tale that would play out every two weeks, telling a complete, compelling story over the course of nine months. That serialized story eventually came to the attention of several publishers, who saw it as a potential debut novel for Robin Parrish.

In 2005, Bethany House Publishers brought Robin full circle by contracting him for the rights to not only that first book, Relentless -- but two sequels including Fearless and Merciless. A trilogy that unfolded in the consecutive summers of 2006, 2007, and this year, 2008. One massive tale -- of which that first, original story would form only the foundational first volume of the three -- spread across three books.

Robin Parrish is a journalist who's written about pop culture for more than a decade. Currently he serves as Senior Editor at XZOOSIA.com, a community portal that fuses social networking with magazine-style features about entertainment and culture. He and his wife, Karen and son live in North Carolina. 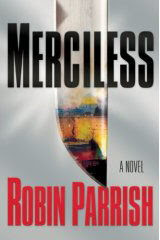 The world as we know it has ENDED.
DEATH and CHAOS creep across the globe and only the POWERLESS can RISE UP to stop it.

But can anything stop the onslaught of the DARKWORLD

From the earth's depths crawls a figure with skin like granite, flames for eyes, and the face of Grant Borrows.
Oblivion has arrived.

Every clock around the world has stopped. Time has frozen.

The Secretum have fulfilled the prophecy, unleashing on earth the most powerful being to walk the earth in thousands of years. His name is Oblivion and his touch is death.

But as long as any live who trust in hope and love and freedom, the fight is not over.

They have only one chance before he brings forth the Darkworld.

"Robin Parrish is the kind of writer who understands how to entertain from the word go. His stories are sure to shape fiction for years to come."
~TED DEKKER, author of ADAM

If you would like to read the first chapter of Merciless, go HERE

Posted by apple blossom at 9:27 AM