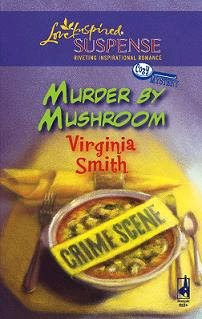 Murder by Mushroom received a 4-Star review from Romantic Times!

From the back cover:

Serving up murderous munchies at a church potluck social wouldn’t win any popularity contests, as Jackie Hoffner discovered. Someone had laced the casserole she brought with poisonous mushrooms… and the deadly dish had fellow churchgoer and town fussbudget Alice Farmer pushing up daisies. Now the gossip-hungry townsfolk suspected Jackie of foul play. To prove her innocence, she decided to conduct her own murder investigation, and Trooper Dennis Walsh’s helpful efforts and boy-next-door charm were welcome.

Meanwhile, the town’s mysterious poisoner seemed to have more victims in mind…


My Review:
Jackie finds herself in the middle of a murder investigation. The murderer used Jackie's casserole. Jackie trys to help police solve the murder. But she finds herself in deeper than she planned and possibly hurting friendships in the long run. Jackie just wants to help bring justice OR is there another motive behind her private personal investigations? Does she get in deeper than she wants? Will any good come from her getting involved? You read the book and see for yourself. This was my first read of Virginia Smith's and I loved it. I'll be looking for more of her books in the future.

What other people are saying about Murder by Mushroom

"If you have ever been a part of a small church you will surely identify with and enjoy Murder by Mushroom which successfully nails both the characters and the character of small churches and small towns. Add in a dash of romance with a handsome cop assigned to accompany the detective Jackie's involvement in the murder, and you've got a winning recipe for fun, romance, and suspense." ... Teena from California

"This is the first book I've read by the author and I am really impressed. She kept you guessing until the very end. A very quick read, really witty and fun. I anxiously await her next book." D.L. from Texas

"This is a true cozy murder mystery. Red herrings,overbearing police investigators,an amateur sleuth thrown into the middle, a cat, a little romance and lots of twists and turns has the reader jumping to conclusions. A church potluck with a heroine whose first casserole ever becomes the scene of the crime is also the place where everyone finds grace--eventually. Author Smith is witty, has quirky characters and writes with a down-home feel. This is plain fun--as long as you don't eat the church potluck! " Crystal from Indiana

"Virginia Smith's cozy mystery is a warm, fuzzy, and nostalgic treat that will have its readers laughing, nodding in reminiscent appreciation, and scratching their heads, trying to figure out whodunit." Martha from Indiana

"This book will make me think of church potlucks differently and already I find I think of mushrooms different. You can invision everything if you've ever attended a church potluck. My Arthritis Specialist saw just the front of the book and says she has to have it so I'm passing my signed copy on which is hard to give up.
You never know to the end who done it. Excellent book. You cannot put it down. " Jane from Missouri

"Murder by Mushroom was my first Steeple Hill novel, but it won't be my last. Ginny Smith has a wit that makes me want to know her personally.
I loved the book!" Ann from North Carolina

"Virginia Smith has a quirky sense of humor that spilles over into her writing. She serves up a delicious story with a cast of suspects that will keep the reader guessing." Barbara, a reader

"This was a fabulous novel! It kept me on the seat of my chair through the entire book!! I love it when that happens!!! This was a very well written suspense novel!" April from Utah
Posted by apple blossom at 3:49 PM

Thanks so much for posting a review of my book! I'm glad you enjoyed it.