How To Play Golf With Your Spouse By Peggy Nelson 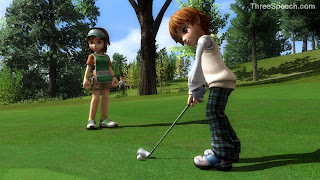 How To Play Golf With Your Spouse

Byron showed his sensitivity to my feelings and moods in many ways, and of course one of the most critical was golf. Having been a teacher for more than fifty years by then, he realized women need to be treated differently, and he was always gentle in his suggestions as we played together during the first year of our marriage. However I was something of a special case. I just knew I could figure out this simple game all by myself, thank you. While I certainly respected his experience, when we were on the course, I was forever thinking about my score and would brook very little distraction while I was endeavoring to make a seven instead of an eight or nine. Silly, wasn’t it?

So, even though he made very few suggestions, within the first six months Byron saw there was a little problem. I would skull a chip across the green or chili-dip a pitch shot, and he would say, “Sweetheart, try that again with an eight iron this time.”

I would reply (minus the sweetheart), “No!” Or I would try what he had recommended, and if it didn’t work instantly, I would fling the offending club back into my bag and march on to the next hole without a word. I thought things were going swimmingly, but Lord Byron knew better.

One day in May 1987 I had just come home from Dallas where I had been working on a writing assignment for Scottish Rite Hospital. Byron met me at the door with the latest issue of Golf Digest magazine in his hand.

“Sweetheart, I just read this article called ‘How To Play Golf With Your Spouse,’ and I want you to read it. I underlined everything I’ve been doing wrong, and I’m going to change, because if I don’t change, you’re not going to want to play golf with me any more, and you may not even want to stay married to me!”

I melted, of course, as well as feeling like the world’s biggest idiot. There I was, balking at advice from the greatest golfer/teacher ever, and he’s taking all the blame for my frustration on the course. I took the magazine from his hands and sat down next to him. After a number of hugs and kisses and a few tears on my part, I read the article as he had instructed. Naturally the piece was not written for professional golfer husbands who had won five majors, fifty-four tournaments, eleven in a row, eighteen in a year, and taught other pros like Watson, Venturi, and Ward. No, it was designed more for the eighteen handicappers, who wouldn’t know “you looked up” from U.S. Open rough.

We talked about it a little bit and finally figured out that, as silly as it was, I preferred to play on my own when I was on the course, instead of thinking all the time that he was going to want me to try another club or re-do a shot. So from that moment on, he would only offer advice when I asked him during a round.

Oddly enough, that made it easier for me to ask, which I did a lot more often over the years. The result was that, even playing only once or twice a week, I went from a thirty to a sixteen. And let’s not think about how much better I could have been if I had sat at the feet of this master of golf and tried to learn all I could about the game. As he told me years later, he really wouldn’t have wanted me to get so gung-ho that I would be in single digits. He knew how much work that would take and felt it wouldn’t have made me happy anyway. Byron always felt the happiest golfers he knew were the 80-85 shooters, who made enough pars to keep them happy, an occasional birdie for an extra lift, and the occasional double bogey to keep them humble.

Oh, it was so much fun playing with him! Not only could Byron still play very well during the first several years of our marriage, but he seemed to get more kick out of my occasional ripping good shot than he did his own. One time we were playing at Riverhill in Kerrville. I was about a twenty-five, and he was about a ten. So we were on the ninth tee, a great, really tough par four, and the forward tees were only a few yards ahead of the whites. He hit an excellent drive, and for once I tagged one that rolled a few yards past his ball.

After rejoicing about my drive, Byron hit a pure little three-iron that ended up on the green about a foot away from the pin for a kick-in birdie. I, my brilliant drive notwithstanding, hit my three-wood amazingly fat and rolled it about thirty yards. Madder than a wet hen, I took out my four-iron, and thinking fairly murderous thoughts, swung blindly at that wretched white ball. Blinking in amazement I watched it sail up and straight onto the green, where it disappeared into the hole for a three. I got a stroke on the hole from Mr. Nelson that particular day!

You would think he’d be a little crestfallen after hitting two wonderful shots and getting an easy birdie but then getting beat by his floundering wife, thanks to that mysterious fiend known as “the rub of the green.” No, my champion absolutely whooped with joy over it and proudly told the story dozens of times afterwards to anyone who would listen. What a hero! “How to play golf with your spouse” indeed!

Peggy Nelson lived most of her life in Ohio, then moved to Texas in 1986 to marry world- renowned professional golfer Byron Nelson. A writer by profession, Peggy worked for twelve years in advertising circles in Dayton, Ohio. After moving to Texas she authored the history of Scottish Rite Hospital for Crippled Children in Dallas. And in 1992 she assisted Byron in the writing of his autobiography, How I Played the Game. Peggy continues to live at and helps manage Byron Nelson’s Fairway Ranch in Roanoke, Texas, plays golf occasionally, does a little flower gardening, tends her small flock of chickens, plays piano, attends Bible classes, volunteers at the new Byron Nelson High School, and serves as a greeter at her church. She is also a busy volunteer at the HP Byron Nelson Championship in Dallas each year. Peggy delights in her many friends, in visits to and from her sons and their families, and in the thousands of happy memories she has of her life with her beloved Byron.

A copy of this book was provided for this review by KCWC.

This blog tour is through:

New book to me but what a fun one and interesting. Thanks :D