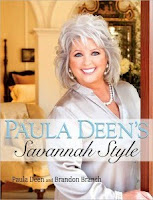 I was very disappointed when I was told that all review copies were spoken for before I inquired to review this book. When I was asked to just do a book spotlight I jumped at the chance. Then I was totally ecstatic when I opened the book. I was told I wouldn't receive a copy for the spotlight. But it sure made my day when I opened the package and found the book. This has been a delightful read. Yes, I have read it from cover to cover in about four days. The pictures are absolutely breath taking and the decorating ideas are so Southern and down to home. Deen shares beautiful ideas to transform your home into a picture perfect haven. In this book, Paula Deen gives great advice as to how to decorate your home to make it feel family-focused, comfortable and fun in every season. The book is divided into the four seasons. In the back you have a source guide for finding places on-line to help in your decorating efforts. You'll find furniture, in-door, out-door and garden, bedding, lighting, rugs, decorative art, fabric and wall covering and much more. There is also a topical index if you want to look things up by topic. This book is just out of this world. If you are thinking about decorating or redecorating then this is just the book for you. I believe I'm going to pass it on to my mom. She loves books like this. I believe it will become one of her table top books.

You may watch an 8 minute video interview here.

With its lush gardens, stately town houses, and sprawling plantations, Savannah is the epitome of old Southern style, and who better to give you the grand tour than Paula Deen, the city’s most famous resident and anointed Queen of Southern Cuisine?
In this gorgeous, richly illustrated book, Paula Deen shares a full year of Southern living. Whether it’s time to put out your best china and make a real fuss, or you’re just gathering for some sweet tea on the porch at dusk, Savannah style is about making folks feel welcome in your home. With the help of decorator and stylist Brandon Branch, you’ll learn how to bring a bit of Southern charm into homes from Minnesota to Mississippi. For each season, there are tips on decorating and entertaining. In the spring, you’ll learn how to make the most of your outdoor spaces, spruce up your porch, and make your garden inviting. In the summer, things get more casual with a dock party. Sleeping spaces, including, of course, the sleeping porch, are the focal point of this chapter. In the fall, cooler weather brings a return to more formal entertaining in the dining room, and in the winter, attention returns to the hearth, as Paula and her neighbors put out their best silver and show you how they celebrate the holidays.
Paula loves getting a peek at her neighbors’ parlors, so she’s included photographs of some of Savannah’s grandest homes. From the vast grounds of Lebanon Plantation to the whimsically restored cottages on Tybee Island, you’ll see the unique blend of old-world elegance and laid-back hospitality that charmed Paula the moment she arrived from Albany, Georgia, with nothing but two hundred dollars and a pair of mouths to feed. And she isn’t shy about giving you a window into her own world, either. From her farmhouse kitchen to her luxurious powder room, you’ll see how Paula lives when she’s not in front of the camera.
Packed with advice and nostalgia, Paula Deen’s Savannah Style makes it easy to bring gracious Southern living to homes north and south of the Mason-Dixon Line.

She is the quintessential American success story, a best-selling author and a television show host, a tastemaker to the stars and to the everyday housewife and family. She is Paula Deen, a down-home, strong willed mom who overcame personal tragedy, long odds, financial and physical challenges to carve one of the most effective and wide ranging entertainment brands that exists today. A brand that is idyllic, inspiring, fun and very much American.
For all her success, the Albany, Georgia native has remained very grounded, in part due to her down home Southern upbringing. She married her high school sweetheart, became a young mom to two sons, and appeared to be living the life she desired, before a series of tragedies, from the death of her parents and the failure of her marriage to a prolonged battle with agoraphobia changed the course of her life forever.
However out of those changes came the success that laid the foundation for the Paula Deen of today, someone who inspires millions through her regular appearances on Oprah, cooks for world leaders, is a best-selling author, and is seen concurrently on three shows running on The Food Network.
The one constant in Deen’s life has always been cooking. It was a staple of her young upbringing, and when times became difficult it was what she knew and could turn back to. In June of 1989, with a $200 budget and the help of sons Jamie and Bobby, she became “The Bag Lady,” creating a home-based meal delivery service in Savannah, Georgia that started the rise. From there, Deen moved to preparing meals at a Savannah Best Western, and followed that five years later by opening her first restaurant, The Lady and Sons, in Savannah.
The popularity of the restaurant led Deen into publishing. Her 1997 cookbook, The Lady and Sons Savannah Country Cookbook, gave her growing fan base the opportunity to try Deen’s recipes at home for the first time, and led to her first appearance on QVC, which took the brand from regional to national and began a stretch of consecutive New York Times best selling cookbooks. The growth continued unabated, and in 1999 USA Today food critic Jerry Shriver named The Lady and Sons International Meal of the year.
Deen’s success in publishing, where she has sold over eight million books, then translated into the magazine world, and Cooking with Paula Deen, her bi-monthly title, launched shortly thereafter, growing to a circulation of over one million.
Not to be outdone with print and restaurant success, the Deen brand then moved to television. “Paula’s Home Cooking” premiered on The Food Network in November of 2002, to huge audience success, and spawned her second show, “Paula’s Party” in 2006. Today Deen has four shows running concurrently on the Food Network, including the latest, “Paula’s Best Dishes“, which launched in 2008.
The next evolution of the brand took place in March of 2008, when Meyer Corp launched the line of Paula Deen signature cookware, bakeware, kitchen tools and accessories both online and at retail, continuing the immersion experience for the brand with consumers.
In 2009, the Deen brand underwent further expansion with an added group of quality strategic partners. Wal-mart launched a new, exclusive line of affordable baked goods, while Smithfield, Kaleen, Nitches, Meyer, Universal, B. Lloyd’s, GOBO, Harrah’s, Quality foods, International Greeting and Cooking.com also began new or expanded partnerships in a host of categories. A compete digital relaunch, the expansion of special edition publications featuring both herself and her brand partners also came into play, making sure the Paula Deen name stayed fresh, relevant, and timely with a growing and more diverse consumer.
Even with the continued expansion, and more planned on a global level in 2010, Paula Deen has remained true to her fans, viewers and readers that look to her name for style, taste and inspiration in the kitchen and the home, all reflective of a climate where quality does not have to be sacrificed due to a challenging economy.
Her latest book is Paula Deen’s Savannah Style.
Visit her website at www.pauladeen.com.

A lovely review at a lovely blog! Great job! Tomorrow it's my turn! Stop by if you get a chance!

I was so bummed that I missed this tour. I want to track down a copy of the book for myself. It sounds fabulous!

I tried but could never get anything. I was so disappointed I am always a dollar short and a day late LOL

Thanks for the plug on Close To His Heart